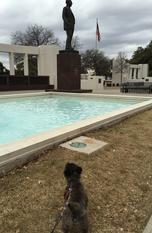 If you want to know the history of Dallas you need to start in Dealey Plaza.  George Bannerman Dealey (1859-1946) played a key role in the city's growth.  The long-time publisher of the Dallas Morning News and  owner of Belo Corporation (parent company of the DMN and WFAA TV).  The plaza was named in his honor and became world famous on November 22, 1963, as the site of the assassination of President John F Kennedy.

The land was donated by philanthropist Sarah Cockrell as a monument to Mr. Dealey and is a city park and the entrance to the West End of Downtown.

The Margaret Hunt Hill Bridge opened and began gracing the skyline of Dallas in 2010.  Named for a Dallas heiress and philanthropist, the bridge spans the Trinity River and links Downtown Dallas with Oak Cliff and South and West Dallas.

At the foot of the southern terminus of the bridge is Trinity Groves and a restaurant incubator. This area is also home to Four Corners Brewing.

At 561 feet, the Reunion Tower has been the most recognizable features of the Dallas skyline since 1978.  "The Orb" features an observation deck and restaurant.  In 1998 an addition to the Hyatt Regency Hotel was added to the base of the tower. 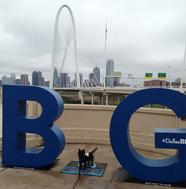 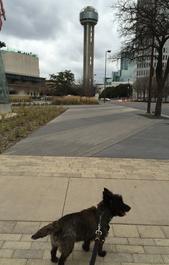